Deadbeat Dad was released on June 18, 2017 by STACE through Fly Company Music Group. The amazing song is a part of a larger EP called Aight, so Boom, with a total of six tracks on it. It is currently growing as one of STACE’s top tracks on Spotify. The entire EP is available on all key music streaming platforms and is also available for purchase on stace.co with other merchandise. Everything is available for fans all over the world. 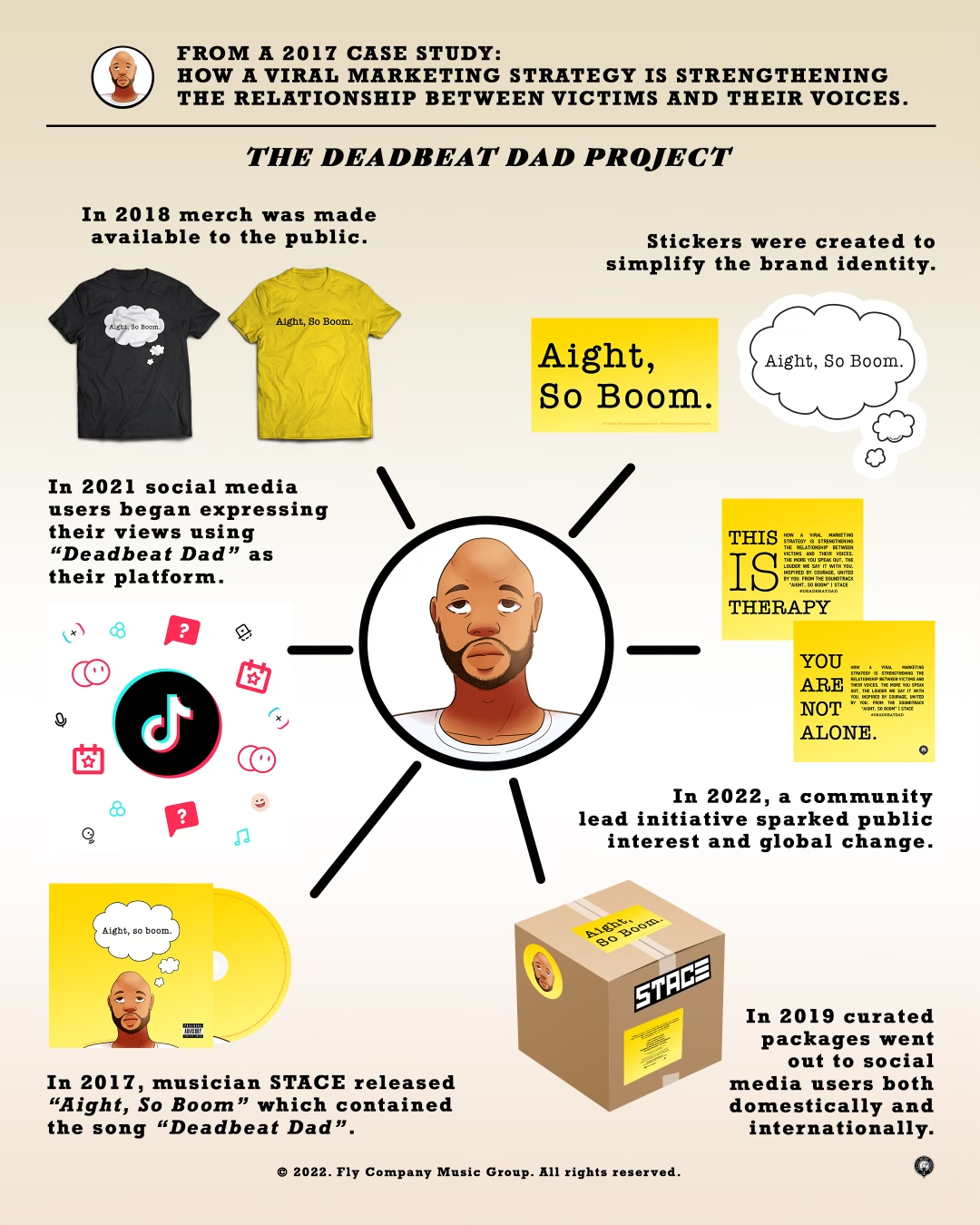 To dive in deeper into the impact specifically of the track Deadbeat Dad, there are major factors that will be explained. These factors contribute to the major questions of; how and why this track went viral? All of it begins with social media and its standing in society today. A trend, and it’s viral rate all depend on the people that can relate to it and figuratively pass on the baton to the next person who also relates to it and wants to share as well. It only takes one person, one audio, and a statement to begin uniting all those voices

With the expansion of social media, the way people use it continues to change over the years. One of the most popular grossing apps in this day in age is TikTok. Released in September 2016, it peaked in popularity when the pandemic hit the world in 2020. The app is a video focused social networking service that’s heart is an endless reel of videos that can be scrolled through infinitely by users. The videos range from 15 seconds to 3 minutes and is a worldwide app available in over forty languages. With a wide age range of users, there is without a doubt something for everyone. The biggest specialty of the app is that the home page is specifically catered to each individual user and no one person has the same feed as someone else. This means that users can easily spend up to hours on the app viewing exactly what they want to see without realizing it. TikTok knows exactly what sides of the app they belong to out of the thousands that exist on their platform.

Tiktok has become an essential platform for creatives with a wide variety of specialties such as; musicians, artists, dancers, comedians, etc. The list can go on and on. Before the rise of Tiktok, users had to find and use the app that better suited their interests. For example, artists flocked and are still thriving on Tumblr. Instagram became the home to influencers and Youtube is where bloggers reside. Tiktok quickly evolved into the best of all those worlds in a single app. Users can be and do everything in one app quickly, easily and efficiently for a large audience, not to mention the ones who see the videos, want to see them. In their hands, creators hold an infinite amount of audios to choose from that could become the beginning of a much bigger movement. 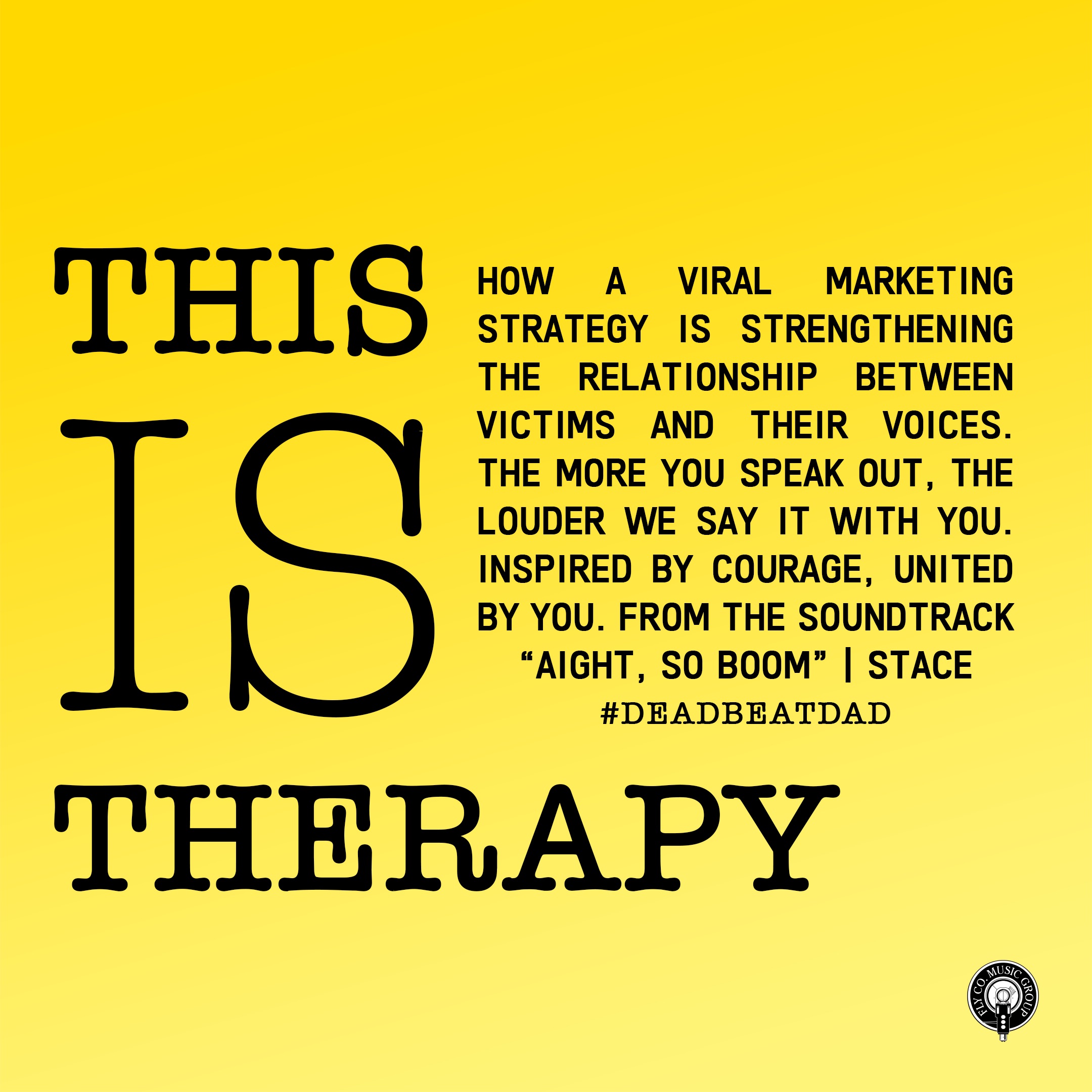 Iconic past trends still exist in the mind of many, the most memorable thing being the audios that were paired with each trend. For example when Harlem Shake by Baauer was trending and being shared by everyone on Youtube. Social trends can be defined by any type of activity that is participated by a society of people as a whole, one video followed by another on a large scale that goes noticed by many. To put it in simple terms, TikTok is a platform that has thousands of trends happening at all times on thousands of feeds, constantly. Trends range from simple as an appealing dance or to complex as someone’s life story all of them being paired with a specific audio.

Trends no longer catch on or function like they did back in the early 2000s. Today everything has to capture the attention of over three times more people than before and it has to be done in at least 5 seconds before they scroll by. Someone may be familiar with a trend believing everyone else has seen, however a person right next to them could have no idea about it because they are focused on a whole different trend. All of this can be either a really good thing for society or a bad thing.

On a larger scale, this means people’s attention spans are growing smaller and smaller at this very moment. This affects how marketing works as a whole and what it takes for people to focus on something. This could be a benefit in the sense that more information can be taken by individuals faster, however that does not guarantee that it will be considered important information. With so many creators, some thrive more than others on the platform which means some videos are never seen. It is no secret that if a creator is verified on the app their content is pushed on to more feeds then others, even if the content does not fit with the users tastes. This brings up the discussion of if someone who truly has a message to share of importance is getting a platform or is it being given to someone else.

When it comes to audios only small segments of songs or sounds are played with content. If it becomes very popular everyone uses it to the point that every other video on the feed has it. Hence the audio becomes more popular and viral than the content with it. In the event of this happening some songs are not known by their name or by the artist they are recognized just as “That one song off TikTok”. Although not the prettiest label, it’s the reason songs get more streams and begin to climb the charts. Take for example the artist Olivia Rodrigo, her track good 4 u that highly trended on TikTok and is now here highest streamed song on Spotify including ranking on Billboard. One could say that there is no such thing as bad publicity and that is especially true with how TikTok works. This app is the reason so many users have had their breakthroughs whether it be in the music industry or in starting their own business.

Every trend starts with a creator and an audio with a message or form of creativity to share. Deadbeat Dad (Single Version) is STACE’s most used audio by users on the platform. Over 80 users on the platform have picked the song to be the audio they use to express themselves. The trend began with one video by Mar (@mwelborn25), a 23 year single mother. Her TikTok primarily focuses on her daily life as she navigates the world with her daughter. Her followers, some who have been with her since the announcement of her pregnancy, comment words of encouragement and others ask questions out of curiosity. On January 18th, 2021 she posted a TikTok answering the question from a follower of “Where is the father of your baby?”. A loaded question that she answered with the help of a perfect audio, that thus set this trend into motion. Some share pictures of their story, they rant or explain what they’re going through, express themselves through a poem. Each video that followed hers was unique to each user’s experience, however all centered around the topic of deadbeat dads. 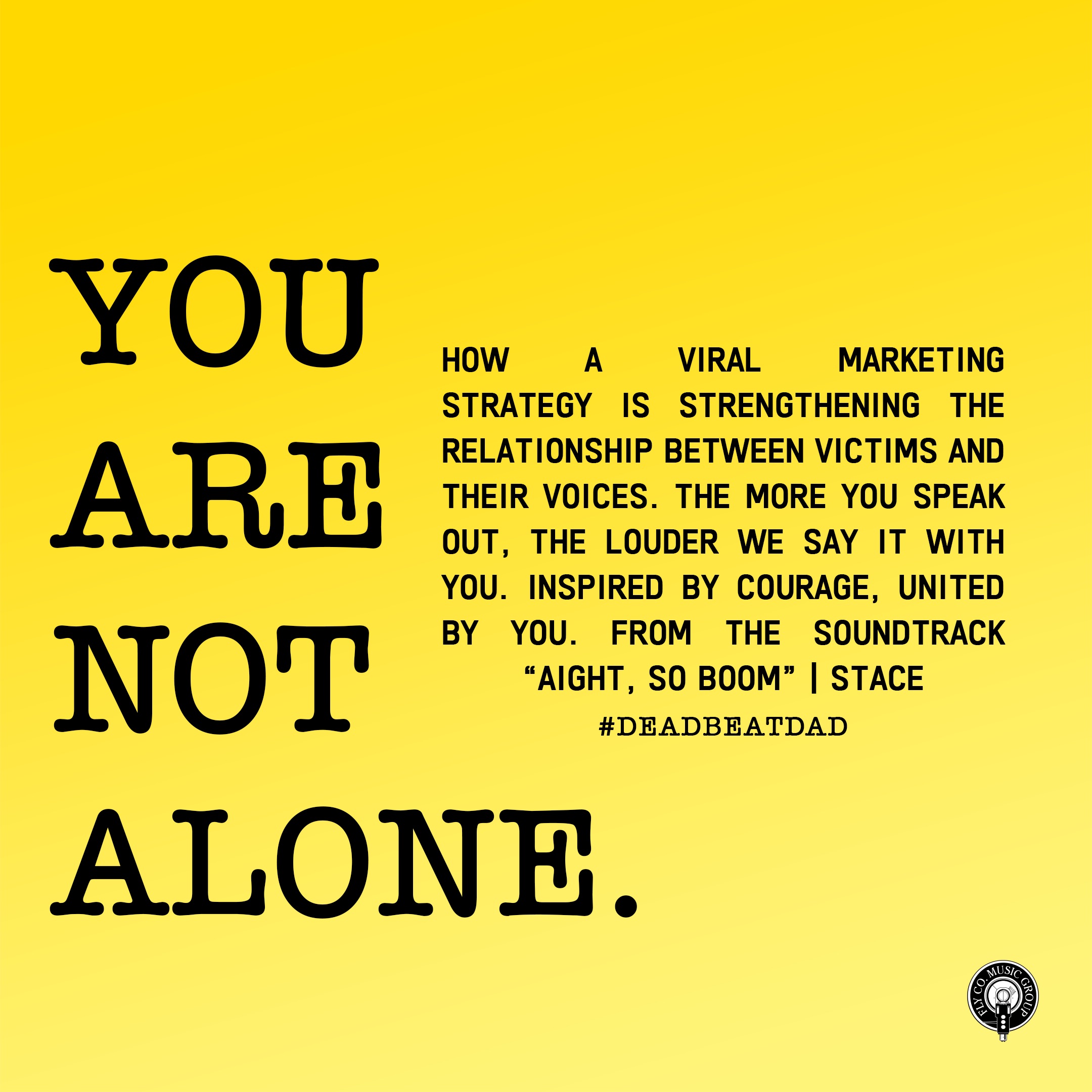 A father who neglects his responsibilities as a parent, especially the ones that are court ordered financial requirements are classified as deadbeat dads. It is an all too common occurrence in society today that there are fathers that fail to step into their roles as a parent. The single mother is put into a difficult situation of trying her best to survive in the world with her child. The innocent children grow up without a father without truly grasping why that is. An all too infuriating situation that many relate too and want to share on TikTok. There are many different reasons as to why so many people are joining this trend.

When something is shared on the internet, especially on an app that is all about views and likes. The user is consenting to the possibility of their content being seen by many or even going viral. If the content is personal, such as in the Deadbeat Dad trend, anyone and everyone will know their current situation. This makes it possible for the person to find support from their followers and community to not stand alone. Sometimes it’s more comforting to tell complete strangers your troubles and receive help or advice that way. They are also able to call out the deadbeat dad on social media and that is where cancel culture comes into play. Cancel culture is a modern form of ostracism in which someone is thrust out of social or professional circles. This can be online, on social media, or in person but once they have gone through it they are “canceled” from then on. Whether its is for popularity, for the message, or for the support, we are listening.

The internet is an extremely large part of our society today, even more so the power of social media. Tiktok has become the easiest and most accessible center for everything. Today people are able to share their voice with the world and find a community to join that supports them. The deadbeat dad trend has united many parents with similar stories and aided them in sharing their voices with the help of Deadbeat Dad by STACE. They chose this song because it expresses what they are feeling, taking the words right out of their mouth. Having to struggle with a deadbeat dad is something extremely difficult and hard to manage. It’s healthy to express all these emotions, and those a part of the trend picked TikTok as their platform. None of them are standing alone, it’s not just a viral trend but the beginning of something bigger.